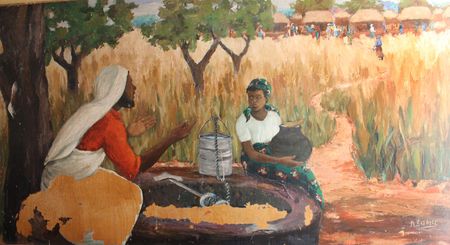 This is the third blog in a series of ten (yes ten) by South Atlanta Community Facilitator, Dan Crain from a mini-book called, “Can you help me?”

Principle One: The Model of Jesus

The whole of point of being a Christian is to grow into the image and likeness of Christ as God revealed himself to the world through. So, as such Christ’s model of the way he met human need cross-culturally and racially is something that we need to model and this is the place that we start. And it is within this that I want to unpack the dynamics of Jesus’ interaction with the Samaritan woman in John 4.

The main point in John’s gospel is that God has incarnated himself in his son Jesus to come to the world as the true light. As John is making his case that Jesus is the true light of the world he tells a very interesting story in John 4. To fully understand the significance of this engagement, one needs to understand the cultural and social dynamics at play with Jesus and the Samaritan woman. The Jews despised the Samaritans and considered them “half-breeds”. This racism had been going on for hundreds of years. Jews typically did not go through Samaria, but John points out that Jesus and his disciples chose to take this road. The other division going on in this context is that Jesus was a Jewish Rabbi. Male Jewish Rabbis typically did not talk to woman, particularly in secret.

So, it is within this context that Jesus walks up to the well and sits down, “being wearied with his journey” (4:6). The Greek word for “weary” is kopiao (from kopos, in secular Greek, a beating or weariness caused by it). Jesus, being tired sees the Samaritan woman and then does something so brilliant; he asks her for help by saying, “Will you give me a drink?”

Even the woman’s reaction in 4.9 says it all, “You are a Jew and I am a Samaritan woman. How can you ask me for a drink?” (For Jews does not associate with Samaritans.) (or even use dishes that they use). [1]

What’s so amazing in this story is that Jesus places himself in a posture of receiving by asking for help from the Samaritan woman. He fully immerses himself in her context in a non-threatening way. It is in this framework of honoring this woman’s dignity, value and worth that Jesus talks about the water that will never run out.

Those have done gospel work among the vulnerable often hear the question, so when do you share the gospel? This is of course to assume that the gospel is not being shared and that the vulnerable don’t know Jesus. What I have found in my experience is that the vulnerable actually know Jesus much better than I do as they have had to depend on him in ways that me as a white middle class man with privilege have never had to.

But, in this context Jesus does confront this woman with her sin as he asks about her husbands and talks with her about the water that. It’s not that the gospel doesn’t need to be shared among the vulnerable, it’s just that it needs to be shared in a relationship built on trust and vulnerability while affirming that person’s dignity and value. Isn’t it interesting that Jesus does not call out her sin until after he affirms her dignity and what she can help him with?

Often times when those in power share the gospel with the vulnerable it comes from a place of condescension. Recently I had a moment with some of the guys in my community in which we all grabbed each other’s hands in a circle and I led them in a prayer of repentance for our sins and how we trust ourselves and not Gods. We were there praying because a friend was about to be homeless. It occurred to me then that maybe this is what sharing the gospel looks like among the vulnerable? We were all confessing our sins to God together. We were all helping each other.

It is in this interaction in John 4 that I believe John is trying to get across this idea; Jesus needed the water she was providing and she needed his. It was from this place of receiving that Jesus asks her for help and also leads her to eternal life.