Community Parks: a test case in loving your neighbor 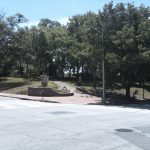 In the middle of our parish is a park notorious for drug dealing, gambling and prostitution called Renaissance Park, or as the homeless and police call it, Jurassic Park. It is surrounded by nice townhouses, apartments, condos, and the Atlanta Civic Center. But directly in front of the park is Pine Street, or as we call it, Crack Street. I have written about this park on many occasions and if you have ever been to Atlanta to work with us you have served in the park. The police make near daily sweeps through the park but nothing changes or is going to change with police presence alone. After all, they can’t be there all the time and that isn’t the kind of change we are looking for anyway.

What is really frustrating is that the local community and government have effectively written it and its inhabitants off. This is evident by the appearance of the park itself. When you enter our park you are struck by the lack of park-like amenities. There are no benches, no picnic tables, no grills, no athletic fields, no playground equipment – nothing. Remember, it is surrounded by nice housing filled with young people and families who would, under different circumstances, take full advantage of having a local park and green space in their “back yard.” But because some of the dealers in our city have been corralled to this area it has become virtually invisible to locals and to the government. I once had a “City Ambassador” approach me and tell me that I should leave the area because the police don’t even come there after dark. First off, that’s a lie. Second, I live in the community and if that was the truth I would have been pretty angry that I couldn’t count on the police to help me after dark. And third, this is what the city is promoting to people they think are visitors?!

Some blame the presence of the homeless shelter a block up the street for the neglect of the park, but that is nonsense. There is another park, Central Park, one block up the road that not too long ago used to have the same dubious distinction as our park. Today it is filled with kids and adults playing on the tennis courts, jungle gyms, several playing fields, picnic areas, etc. It’s not perfect, but it’s pretty nice and welcoming to the community. And there are still homeless folks who hang out in the park along with everyone else. They weren’t run-off from the park. Amazingly, everyone shares the park.

Members of our neighborhood and local community groups moan quite a bit about the persons inhabiting our park, but it’s quite obvious they are not serious about doing anything. After all the best they can come up with is empty banter blaming others and hoping somebody else will take responsibility for their community. If they were serious then at least one of these community groups would pony up some money (some have plenty of it) to buy some equipment for the park and make it a more inviting atmosphere for the people living in the community. (Some have used their resources to try and close the shelter though.) There is one member of the business community in our neighborhood that is serious about changing the park for the better, but he is so hate filled toward the homeless who hang out there that his efforts become outrageous and an obstacle to developing community. You can still go into his restaurant and see the robot he built to accost the homeless in the park.

Our park is good for one thing – political stagecraft. In December the newly elected mayor, Kasim Reed, brought out the media to film him doing a work-day in the park and pledging to “clean things up.” We’ve not seen or heard from him since. His continued statements about enforcing the laws against these no-good vagrants only reveals his ignorance of the city’s own Blueprint to End Homelessness and the “blue ribbon” coalition who authored its findings and recommendations. Or maybe it reveals more about his willingness to please the business community he makes these comments to.

For two years Church on the Street has had a consistent presence in the park. We invest in the lives of the people who frequent the park (dealers and addicts mostly), we keep the park clean (the city does try to keep trash from over flowing in the park too), and we seek to transform lives one at a time. One of the knock on effects our presence has in the park is it disrupts business as usual. While we are there drug deals cannot take place in the open. We become an inconvenience and burden to the dealers. But our goal is not simply to move the drug trade to another corner, but to change the people involved in it while changing the community where it takes place. This is why we don’t enter the park with torches and pitchforks, but rather with love and an unwillingness to surrender these people or this place to evil.

There are two practical things that we do in that park that we believe is making a difference. First, we hang out there. I go into the park daily, often with my family, and talk to the people spending their time there. I get to know them and they get to know me. The more we get to know each other the more we can build trust and speak into each other’s lives. I have learned much from my friends in that park, but I have also seen lives turned around and reconciled. Some don’t like me much hanging out there, of course it’s mainly the drug dealers, but that’s too bad. I’m going to keep coming back, getting in the way of their destruction, by showing them that I love them too. The second thing we do is bring in volunteers each week to spend time or have a picnic in the park. Just because there’s no equipment doesn’t mean we can’t bring in our own stuff. We do all the normal picnic stuff you would do at other parks. We play games, eat, and sit around and talk, but we also invite whoever is in or near the park to join in with us. This has all kinds of upsides. It helps us get to know each other. It helps us give those who are down or depressed some fun. And it reminds the powers that Christ and His church have not given up that place or those people to them.

What I find ridiculous is that the volunteers who come to help are usually not locals. Often they are not even from Georgia. Like I said, the locals give lip service at best. They are not attentive to their neighbors or neighborhood in any meaningful way (let me place a caveat here, there are a handful of locals who do care and are attentive, but they are few). When will the Christians in the community take seriously the command to love their neighbors in concrete ways? When will the members of the community take the pragmatic steps of improving the neighborhood?

To my community: I will assume that everyone wants to make a difference but simply doesn’t know what to do or where to begin. If you want to find out where to begin let me invite you on any Saturday of the year to come to the park around 10:30am and join us as we get to know our community. As you get to know one another, including the homeless, you might be surprised at the opportunities that present themselves to love one another and improve the park.