Flowers, Inclusion and Pride: a 20 for 20 story 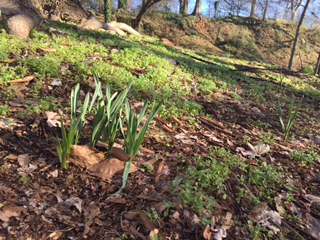 [In celebration of 20 years of service we are collecting 20 stories of people and events that helped to shape REMERGE. #20for20. This story was originally posted January 30, 2017 by our Community Program Director Sylvia Broome when the focus of her efforts were in Central Atlanta. We invite you to contribute a gift in celebration to honor this milestone.]

In the Central Atlanta neighborhood there is a big problem with litter.  Even with the few trashcans available, many of the streets and parks are littered with discards.  This is primarily in the area of the Peachtree-Pine Shelter, but extends towards the local shopping center and into the parks.

I’m very aware of this problem and often bring a trash bag with me when I walk the neighborhood, helping to pick up litter on the street and in the park.  One thing I’ve noticed is that the further away you get from the shelter area, the less litter you see.  This is particularly true in front of the condos and houses.  I’ve been thinking about why this is so, and I have come to the conclusion is that the people who live in the homes feel a sense of ownership of their community.  The people who don’t have homes, do not.  When you own or lease a home, you take pride in it, keep it picked up and looking nice.

A few years ago, REMERGE began intentionally picking up litter in Renaissance Park every Saturday.  The REMERGE participants, both those with homes and those living in and around the shelter, worked together to clean up the park.  Working this way, those who felt left out of the community felt welcomed in, and it began to create a sense of belonging  – “ownership” – a part of the neighborhood.

Over time this became a regular part of our culture, and extended to a clean up effort daily.  Gradually I noticed that the effort to clean up did not depend upon someone from the community directing the participants to pick up; it was done as part of the regular routine.  It became second nature both to those with homes and the homeless residents, and was a point of pride.

A few weeks ago our community had an opportunity to plant daffodil bulbs with those living in the neighborhood homes.

Digging in the dirt alongside one another resulted in a friendship between the group and the REMERGE community – all were able to participate in something meaningful alongside those who had ownership in the neighborhood.

Yesterday, our community was enjoying coffee in the park when we saw the beginning of the daffodils sprouting.  We looked and they were everywhere!  One of the guys, a man of few words, looked around and said with pride, “We helped plant those!”  At that moment I realized that he felt ownership in the neighborhood – included in the flourishing of life.

A person feels valuable when they are loved and respected. It creates belonging, and the understanding that everyone has something to offer. When this happens a person feels that they have a place, and that the well being of the neighborhood depends upon their participation.  Reconciliation happens when all feel included and feel like they have something to contribute.