The Need to Lament 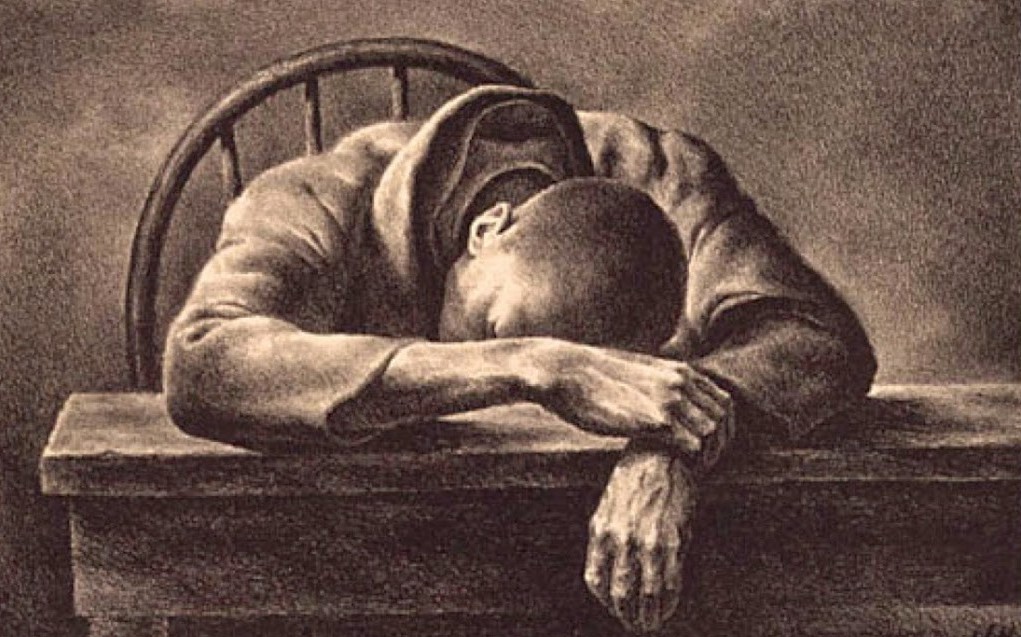 REMERGE Community Pastor and trainer, Dan Crain has been doing work with a diverse group of men around racial reconciliation using the Be the Bridge curriculum. Session Two of the curriculum is Acknowledgment and Lament. A member of this group, Herb Zabel wrote this lament for our group and we wanted to share it with our REMERGE community as a Biblical call to lament what has divided us in order to understand what we need to do to live out the Beloved Community.

In 1851 Josefa Segovia was hung by a vigilante mob without trial under accusation of murdering a white man. She was the only woman reported to have been lynched during California Gold rush.

In 1911 a mob of 100 people hanged a fourteen-year-old boy, Antonio Gomez. The people of Thorndale, TX lynched the boy and dragged him through the streets.

In the 1920’s as the Great Depression spiked, Anglo-Americans accused Mexicans and foreigners of stealing American jobs. The US government forcibly deported 2 million people of Mexican descent, 60% of them were American citizens. This time was called ‘repatriation’. Employers drove men to the border and pushed them out of the car. The state of Colorado ordered all of its “Mexicans” (people who spoke Spanish) to leave the state in 1936 – 82,000 people were deported. The state blockaded the southern border to ensure they rounded everyone up to keep them from going to other states.

54 million Latinos live in the US. In 2016 52% said they had experienced discrimination (PEW survey).

From the LA Times Article “The black-Latino Blame Game”, published in November of 2007:

“Animosity between Latinos and blacks is the worst-kept secret in race relations in America. For years, Latino leaders have pointed the finger of blame at blacks when Latinos are robbed, beaten and even murdered.”

“Blacks, in turn, have blamed Latinos for taking jobs, for colonizing neighborhoods, for gang violence.”

“These days, the tension between the races is noticeable not only in prison life and in gang warfare (where it’s been a staple of life for decades) but in politics, in schools, in housing, in the immigration debate. Conflicts today are just as likely — in some cases, more likely — to be between blacks and Latinos as between blacks and whites. In fact, even though hate-crime laws were originally created to combat crimes by whites against minority groups, the majority of L.A. County’s hate crimes against blacks in 2006 were suspected to have been committed by Latinos, and vice versa, according to the county Commission on Human Relations.”

“Across the country — in Plainfield, N.J.; Jacksonville, Fla.; Annapolis, Md., and Indianapolis, Ind., among other places — the clash between black and brown has drawn attention, and lots of it, because it involves two groups that some think should be natural allies. At least that’s what the Rev. Martin Luther King Jr. and Cesar Chavez thought four decades ago. They had a mutual admiration society and passionately believed that blacks and Latinos were equally oppressed minorities and should march in lock step. “Our separate struggles are really one — a struggle for freedom, for dignity and for humanity,” King wrote to Chavez in 1965. But that rhapsodic notion of black and brown harmony is now the faintest of faint memories. Three years ago, when the Census Bureau proclaimed Latinos the largest minority in the U.S., many blacks loudly grumbled that they would be shoved even further to the margin among minorities. The grumbles have risen to a near-shrill pitch among many blacks during the immigration debates of recent years. At a 2005 meeting in L.A., black radio host Terry Anderson summed up a not-uncommon position in the African American community (or the White community) when he blamed illegal immigrants for stealing jobs from blacks and crowding schools. “We’ve been invaded,” he said. “There’s no other word for it.””

In 1943 The Navajo increased coal mining production to extract the valuable resource on their reservation. During that time coal was $4.40/ton with $1.50 as profit for the owner of the land. The deal the govt offered the Navajo gave a profit of $0.17/ton, with no renegotiation of prices possible in the contract. In the 1970’s during the oil crisis coal was $15/ton. he Navajo still only got $0.17/ton.

From 1969-1974, 25 to 34% of all native American children were removed and placed in federal care, compared to 5% on non-Native American children. Basically the state did not agree with the tribal natives’ way of life, and deemed the care of their children unfit. In 1978 Congress established the Indian Child Welfare Act – which used different guidelines to assess children’s homes. The Act also included a requirement to involve the tribal government.

Native American Boarding Schools were started in the 1870s. The programs and the idea were based on a prison program, and statements made by the man who developed that program, Richard Pratt, are horrific: “All the Indian there is in the race should be dead. Kill the Indian in him, and save the man.”

In 2018, there are still people who remember being sent away from their families to attend Native American boarding schools. In 2018, there are still people who remember their mothers crying as they were taken away, being beaten for speaking in their native language, being forced to cut their hair, and being given new, “Americanized” names. There were around 100 boarding schools operating in the United States, and even into the 1960s, teachers there were told that their first responsibility wasn’t to educate students but to “civilize” them.

The reality is that this is all just information. It stirs humanitarian compassion in me, but it is not my lament. Instead I need to lament, to grieve all the missed opportunities. All the times where I could have been the light of Christ to others and I failed. . . mostly because I couldn’t get out of my own way.

When I was a kid, there were two brothers that lived down the street from me who were of Latino descent. We used to play together, but for some reason, I don’t know whether it was fear, a sense of superiority, or something else, their presence annoyed me. One day, I was having a party, and they asked if they could come. I told them no.

I remember as a child living in Florida hearing about Cuban immigration. I felt that these foreign people were coming to invade my land, to take resources and things that I deserved, not them. To me, they were not welcome guests. They were a threat that I passively wanted gone.

I remember my Grandpa, as he ate Brazil nuts, blithely calling them “[N-word] toes”. I remember thinking that there was nothing unusual or wrong about it.

My best friend is a black man of Trinidadian descent. We’ve been through many highs and lows together, and I consider him a brother. Yet, in our entire friendship, not once have I talked about race with him. I’ve not talked about my feelings on it, and I haven’t asked him his.

I’ve stood passively by at work sites where I hear black workers disparage their Latino co-workers, and I’ve heard the Latino workers fire right back with equally mean and hateful comments. I didn’t rebuke them or encourage them to act differently to each other, to show the love that Christ commands we show all our neighbors.

I get full of anger as I see my white daughter belittled and insulted, called a racist in her majority-black and Latino classroom, even though she’s done nothing wrong. I think how unfair it is that in her innocence, she has to bear the weight of this awful sin that she has not even committed.

I get angry when I think about my black foster son, and what I had to deal with while taking care of him. I think about the disapproving looks I got when I took him to a black barber shop so he could get a proper haircut and a dose of culture. I can’t help but feel resentment toward the black social workers that repeatedly told me that it would be best if he were with his own people, even though I was working so hard to provide him both a loving home and connection to his heritage.

These feelings come from my sinful self. In each of these situations my eyes are not seeing the offenders as children of God. Genesis 1:27 “For God created man in his own image.”

I know that I am forgiven because of what Christ Jesus did for me on the cross. As Paul says in Romans 8:1 – There is no condemnation for those who are in Christ Jesus.

This morning I was woken up at 2:30 by my dogs. I felt that God was trying to get my attention. I opened my Bible randomly to 2 Chronicles 34. “Surely”, I thought, “this is not where I am supposed to be.” But I read.

“Josiah was eight years old when he began to reign. . . in the eighth year of his reign, while he was yet a boy, he began to seek the God of David his father, and in the twelfth year he began to purge Judah and Jerusalem of the high places, the Asherim, and the carved and metal images. And they chopped down the altars of the Baals in his presence, and he cut down the incense altars that stood above them. And he broke in pieces the Asherim and the carved and the metal images, and he made dust of them and scattered it over the graves of those who had sacrificed to them.”

As I read this, I thought about the false gods and idols in our hearts. Superiority. Fear of otherness. A desire for comfort that leads to passivity. I wanted to tear these idols down like Josiah; to break them and scatter their ashes to the wind. But I knew that only through the gospel of Jesus would I have the power to tear these idols down and replace them with his commands to love God and love my neighbor well. If we tear down the social mechanisms of racism, but do not replace them with the gospel of Jesus; then we have done nothing of eternal significance.

I am part of God’s story. Everything that previously separated me from God, is now being used to glorify God,because of the atonement of Jesus. I have no story, but the story of the Lord. I have nothing important to say, if I am not honoring God. I have nothing to offer if I do not offer the love of Jesus Christ. I do not believe we are here to better understand reconciliation, I believe we are here to better understand and know the love of our Lord, Jesus Christ.