What if…..Super Saturday’s were different? 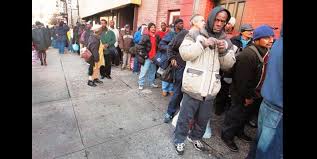 Saturdays are big events in Central Atlanta near the Peachtree-Pine homeless shelter.  The area fills with good hearted people coming to feed the homeless and hand out clothing, blankets, and hygiene items.  This past weekend, four days before Thanksgiving, the streets were packed to the point that cars could not even pass one another.  A chain blocking a nearby parking lot was broken down and cars filled the lot as people set up tables and grills and handed out delicious meal after delicious meal.  Piles of clothing, shoes and blankets were set out for the taking.  Smiling faces and a friendly hello from the kind hearted people were in evidence, but most of the community members moved quickly from table to car looking to see what each had to give away.

The atmosphere is like a festival, but a very strange one, as two groups of people encounter one another, each with a role to play:  those who “have” giving to those who “have not”.  Each person thinks,   “I have, and I know what  “they” need”, and “They have, but “they” don’t know what I need”.

One is true and the other is not.  How you look at these statements impacts greatly how you follow Jesus command to feed the hungry and clothe the naked.

I’ve been on the streets in the homeless community for more than five years now and I’ve seen first hand many, many “Super Saturdays”.  I’ve seen the huge amount of kind hearted people coming from areas outside the community to “feed the homeless”.  I’ve seen the litter of half eaten food and the picked through piles of clothing left after the groups leave. I talk to the members of the homeless community and most say they appreciate the effort “they” make for “us”.  But some have something different to say:

“These people come from big churches and surely someone there is hiring.”

“We need bus passes to go home to family and to look for work.”

“We need a way to help us out of our situation, not to give us more food than we can eat.”

“Is there someone to sponsor me at a shelter?  It’s hard to hide that you are sleeping on the street when you are interviewing for a job…”

These kind hearted people simply don’t know these needs.  They assume that food and clothing are scarce and want to help.

What if… there was a way for the local churches and the neighborhood to coordinate with those coming from out of the area to set up and serve the food being brought, giving the people that come from outside the community a chance to sit and share a meal with those who come to eat?

What if… the clothing brought for the homeless was instead donated to a locally run thrift store where the items were sold at very low prices; giving each person in the community a chance to shop for themselves with dignity?

What if… through all of this, people were given an opportunity to get to know one another… to become friends?

A friend will move heaven and earth to help another friend.  A friend knows someones needs, their fears, their joys…their name.

“Thus says the Lord…I have called you by name, you are mine…” Isaiah 43:1b

Doing this takes time, effort and the willingness to be emotionally vulnerable.  Sometimes it means finding the one who is needy is actually you.  Doing this means putting aside your self interest and assumptions.  Doing this requires a new way of thinking, and that is always hard.  But doing this is the only way to make a lasting impact in peoples lives.

However, this is what Jesus calls us to do…to love each other as he loves us.  Jesus came and lived among the poor and the marginalized.  He learned their names, shared meals with them, laughed and cried with them.  Jesus became a neighbor and people’s lives were changed.

What if…we all did this?  Now this would really be a “Super Saturday”!